Some principles of becoming “a Poker God” 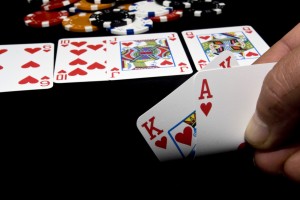 Texas Holdem Poker is a card game. As we have seen, one box of playing cards contains 52 pieces, divided into four types of cards (Spade, Heart, Diamond, Club), each of which consists of 13 cards (ace, 2, 3, until the King). In the Poker game, As or King are expected cards. Playing poker online or offline requires intelligence and specific techniques. Now, the number of poker players is increasing rapidly and that’s the reason why we have to have the talent or knowledge to win the game of poker.

How to become a poker god

Winning the poker game is not an easy job especially if you are a beginner. It is highly recommended for those who are beginners to learn first before following the game. If you already know the basic poker game, then you can play. By increasing your playing time, you would gain more knowledge and tricks that can lead you into a poker champion. As a first step to become a poker god, you need to select the appropriate seating position. The seating position is greatly affecting the game course. If you are the last player, then you can see the game situation better than your opponent. You can anticipate the game opponents and learn. By studying the game of your opponent, you would know the ins and out of the opponent’s playing.

Here are tips and tricks to win in online poker play. Some of the tricks were collected from poker champions around the world:

• bluffing or bullying; if the combination of poker card results in small cards or even bad cards, do not be too often doing fold or your opponent would easily read the way you are playing. When you have small cards, you just have to raise your bet or wager with confidence that your opponents think you got very nice cards.
• Do not be too long thinking, because your opponent would think you’re hesitant with your cards.
• Always change your strategy so that your opponents cannot guess your playing tricks.
• Play in a small room in advance and if you already collect large amounts of capital, then you can move to a larger room.
• Select a room that contains 4-5 people, as the more opponent you are playing with, the less winning chance you have.

Some of the basic rules to play 3 card poker