Gambling is all about having fun and trying your luck, but some people have more of it than others. As the following list of people and daunting courage will show you, it is possible to gamble with high stakes and come out as a winner.

Whether it was blind luck, or if Ashley Revell had made a deal with the devil, it seems that it paid off, handsomely. Namely, he bet everything he had, and managed to double his earnings. While some would continue pushing their luck, Revell just tipped his dealer and took off. Though many would argue whether he would have made more if he stayed, perhaps it is best to settle with what luck has dealt you.

Even if you think that your boss could be hard on you, it is worth remembering that the founder of FedEx has saved the company by gambling the last of the company’s money and turning it into profit. It was a daring and bold move that could have doomed the company and secure the loss of many workers. However, instead, luck was shining on Frederick Smith, and he managed to walk away with a huge winning.

Playing Craps at the casino is a tough game, because chances are that you will eventually roll a bad hand, and lose your money. However, this is exactly the opposite from what Patricia Demauro had experienced, as she managed to roll the dice 154 times without throwing a seven. Not only did she set a world record, but she managed to win a lot of money as well. Persistence was key, as well as having fun while playing. 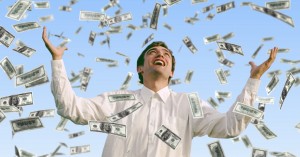 While it sounds amazing that someone can win half a million dollars in a single game of pokies, it is more astonishing that it was done by an eight year old child. However, the website running the online game refused to pay out because of the age of the boy, even though he was widely known as the little wizard of poker. This just goes to show that while having fun you might end up winning a lot, you will not get paid unless you are of legal age.

Never underestimate your luck and just how much it is possible to win even when you do it on a whim. Cynthia Jay has had the luck to walk away with the largest jackpot in history for a slot machine. While she did not expect to win anything big, it was a huge surprise that on her ninth pull the machine decided to shower her with love, and with all the money it has accumulated so far as the jackpot.

Trying your luck and trusting in fate to guide your hand does not always ensure that you win, but it will provide you with a fun evening if nothing else. However, winning at a game and winning big can happen at almost any time, regardless of the game in question. Though you have to be daring, and you need to be persistent as well.